Among the peaks that rise up south of the Amiata, Monte Labbro is the most recognizable and panoramic. Protected by a Regional Nature Reserve covering 630 hectares, it is today the center of a LIFE program funded by the European Union. On the summit rises the Tower of David, the curious monument built in the nineteenth century by David Lazzaretti, the “prophet of the Amiata”, who founded the Giurisdavidici movement and was killed in 1878. The itinerary that reaches the top from the end of the road it’s very short. A stack is required to enter the cave. The restoration of the Tower of David began in November 2004. 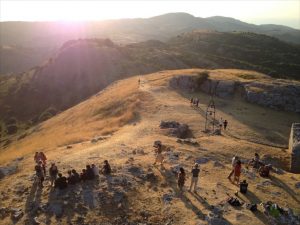 From Arcidosso (679 meters) or Santa Fiora (687 meters) follow the road that connects the two centers to the Aiole pass, and here it bends south (left for those arriving from Santa Fiora, right if you come from Arcidosso) on the highway 323 towards Roccalbegna and Semproniano. After two kilometers, at km 33.400 of the highway, turn off the wide dirt road that goes up towards the Wildlife Park and Monte Labbro. The same point can also be reached from Roccalbegna (522 meters) or Semproniano (601 meters). From the junction follow the dirt road that leaves the branch to the right for the Wildlife Park, and rises to wide turns on the bare slopes of Monte Labbro, aiming towards the summit and its clearly visible tower. After passing a farmhouse, leave a branch on the left (1090 meters) from which the next itinerary arrives, touching the Casa dei Davidiani (today used as a stable) and going right at a crossroads. In a few dozen meters you reach a square (1120 meters) next to which are a picnic area, the signs of the LIFE project and a prefabricated. 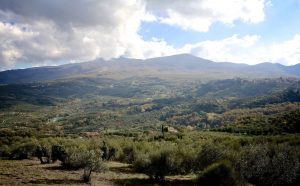 You continue on foot up the dirt track, you pass a gate, then continue along a path through the woods to a fence before which the trail 704 arrives from the left. Climbing the fence (there is a ladder) climb to the right on uncovered land up to the Tower of David and the remains of the buildings and the church on the left of it. A little further down is the entrance to the cave which houses a juridavid altar. The top of the Tower is the highest point of Monte Labbro (1193 meters). From the summit esplanade one can admire an exceptional view of the Amata. Return time is 0.30 hours.